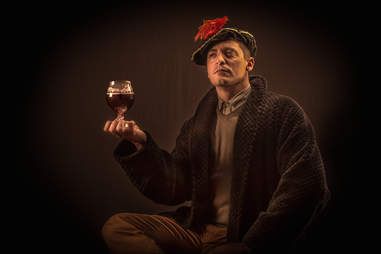 Cars used to be pretty simple, and as far as I ever knew, beer was just beer.  Both have changed a lot over the years.

One night way back when, a friend (hey, Ken) and I had a few cold ones while we rebuilt the 2-barrel Rochester carburetor of my Chevy Malibu.  At the end of the night, we had a rather nicely formed pyramid of empty Rolling Rock cans.  But then we found an "extra" gasket.  To our horror, we soon realized that the extra gasket was actually the one we forgot to put between the upper jet assembly and the lower banjo assembly.  By the time the sun came up, we had fixed the error and the carb rebuild was finally finished.  Needless to say, beer and carburetor rebuilds don't mix.

These days, I'm less of a car mechanic and more of a "beer snob".  Ambers, Reds, Browns, Porters, mostly.  Not IPAs (put a Xmas tree and a grapefruit in a blender and you have your basic IPA).  But yes, I became sorta picky, and no longer considered a Mickey's Big Mouth or a PBR to be a significant part of my diet.  OK, not any  part of my diet.

But I'm not a true beer snob.  Read this annoying little snippet from a real review of a well-known (and damn good, by the way) craft ale, copied from a website that actually posts this kind of nonsense:

"...pours a semi translucent amber color with a creamy/foamy  2-finger head; nice lacing.  The smell is malty, bread like; hint of vanilla. Taste is nutty, bread pudding essence with overtones of stone-fruits. Mouth-feel is medium bodied with an abundance of mildly pleasant..."

I mean, come on.  Really?  I would never rebuild a carburetor with that guy.