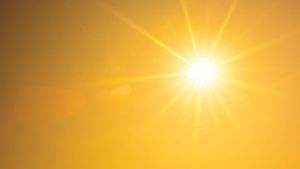 Summer always reminds me of how much I love the Fall.  Nothing wrong with summer, I'm just not a big fan, though it is very hot today and I could use a big fan.  I love Florida, boats, fishing, and water in general.  So then, how could I not love this season?  I'm not really even sure, but the fact is that the fall is my hands-down favorite.  There's college football, Halloween, empty theme parks, the greatest fishing of the entire year, and - best of all - lower humidity.

But here, just north of the tropics, there's a fifth season, the Season of Torture.  It's that time of year when you play a poolside gig, and the combination of sweat and 102% humidity causes your Tommy Bahama shirt to stick to your man-breasts like Gorilla Glue on flypaper, as your guitar's strings gum up so badly that you wonder if you'd mistakenly strung it up with Twizzlers.

When I was a Field Engineer (my last career job prior to playing music), there was a special kind of torture: working inside the radome of Caribbean-bound cruise ships.  The radome is that big white "golf ball" on the top deck where the satellite dish antenna is housed.  The dish diameter just barely fits inside of the radome, with about a centimeter or two to spare in any direction.  The dish must be perfectly balanced in order to move quickly.  So it's sort of like a 1,500 pound gyroscope, tracking the satellites while the ship moves around at sea.

Because of that perfectly balanced antenna, there can be no air currents allowed inside the radome to possibly push the dish around.  No windows, no AC, no fan.  Just relentless, crushing, overwhelming heat.  Most of the work has to be done while crouching or kneeling under the dish.  About 45 minutes is the endurance limit, when you may start seeing dark spots and imaginary swirly kaleidoscopic visual things as your brain starts to melt.  Blacking out would seem to be an improvement.  Open the hatch and go down the access ladder, take a break, go back up the ladder, get back in.

But it's not what you feel or see so much as what you hear; the sound of Margarita machines, water slides, Calypso music, and laughter outside the dome.

I actually did enjoy most of that field job (though given a choice I'll take the Alaska and Norway fjord cruises any day).  It was a great experience and a nice way to see the world using somebody else's money.  But yeah, it could get pretty hot in the tropics, up in that radome.  So, can I handle playing my guitar on a July afternoon in Florida wearing a tropical-print shirt?  No problem; sign me up.