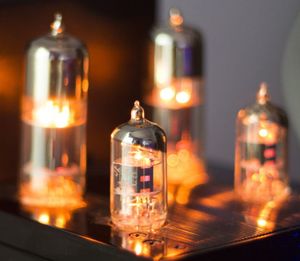 What is it about vacuum tubes?  Why would so many of us pay so much for for gear that has electronics that are modeled after 1940s-era technology?  Though it seems odd and outdated, most guitar players will swear that tube amps are superior to solid state.  Is it hype, or for real?  Maybe it's a little of both.  Regardless, here are my arguments for why I'm sold on them:

Nowadays, smart solid state amp and effects pedal builders use things like Impulse Response curves, Amp Sims and other tools to emulate what tube amps already do naturally.  They're getting pretty good at this.  To be honest, I hope they never truly nail it.

The mystique about vacuum tubes is a strange mix of hype, nostalgia and factual electronic theory.  But any way you want to justify them, tubes are here to stay.  Brah.