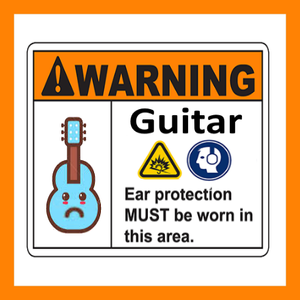 I really love what I do.  Playing music is, by far, the best "job" I've ever had.  No one so lucky should ever complain.  So please forgive me for my second consecutive whiney post.  Anyway, here goes:

Guitar players, especially electric guitar players, are often told that they're too loud.  That complaint is usually justfied.  Aware of this, I am always extra careful to keep my volume at proper levels.  If I'm too loud, it can be very annoying for the crowd, and even more so for the venue's workers.  Here's a typical conversation between two customers at a particularly earsplitting thrash-metal nightclub:

He:  "WHAT ARE YOU DOING LATER TONIGHT?"

Most of us hate that kind of loud, right?  I sure do, so I try to keep my sound in the sweet spot.  Not too loud, not too soft.

But one night not long ago, I just couldn't possibly have gotten any LESS loud.  The manager who hired me was a fine host and a nice enough person but unfortunately he had the hypersensitive sonar hearing of a fruit bat.  By the time he was finally satisfied, the sound of my voice was literally louder than it was through the PA.

Even worse is that all night long, people kept saying "Dude, you really need to turn up!  Nobody can hear you!"  Well, I guess one person could.

To put it scientifically (not that I need to):