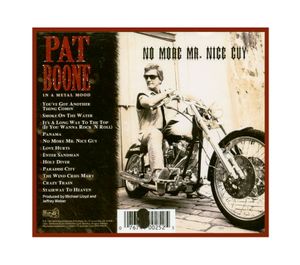 In 1985, I saw something I never would have believed could happen.  On the TV show Nightline, Frank Zappa and Donny Osmond were discussing a Music Content Labeling bill that was up for vote in Congress.  Strangely, they were both in almost total agreement against censorship.  What a shock to see the musical equivalent of the North and South poles in near lockstep.

Mixing water-and-oil entertainers for ratings is nothing new.  For some reason, there are always certain people who enjoy that (?).  Laurel and Hardy gave way to Abbot and Costello, then Dean Martin / Jerry Lewis, and nowadays, it seems like everywhere I look it's Snoop Dog and Martha Stewart.

Another thing happening a lot is so-called 'crossover' music, though some things should never cross over.  In 1997, Pat Boone (yes, THAT Pat Boone) did an album of Hard Rock / Prozac Pop covers, titled In A Metal Mood.  A dozen songs originally done by bands like Metallica, AC/DC, Ozzy, etc, but turned into crooning lounge lizard masterpieces.  I dare you to make it to the end of his cover of Van Halen's Panama.  I still can't decide if the backup vocals are the Lawrence Welk singers or the Brady Bunch.

And then there's beyond weird.  You haven't lived life to its fullest until you experience William Shatner's version of Mr Tambourine Man.  Or Leonard Nimoy's Ballad Of Bilbo Baggins.  Wow.

I will give Pat Boone some credit though.  I'm pretty sure he did that album as some kind of big joke.  And yep, it worked.  But I actually think Kirk and Spock were trying to be serious.  Or maybe it's just the musical equivalent of Jumping The Shark; a last gasp as your star power fades away.

I'm halfway expecting that a Marilyn Manson / Amy Grant duet is around the corner.