Gigs From Hell - The Night I was Dumped At The Landfill 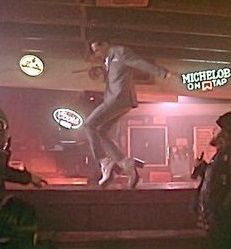 There used to be a venue in North Melbourne that was near (actually right next to) the Sarno Road landfill.  It was called, rightly, The Landfill Saloon.

It was pretty popular with locals, especially with bikers, but for some reason was closed in 2016.  I'm not sure why, because they supposedly had very good food, and the outdoor deck they built was big, solid, and on a lot that was perfect for large rowdy crowds.  Maybe it was because it was too close to a landfill.

In my first year doing this solo thing, 2014, I played there.  As a guy just starting out, I grabbed every gig I could get.  The Landfill Saloon taught me an important lesson: Don't take every single offer.  I went down in flames.  They hated my music.  Not me, just my music.

There were around 60 or 70 people there, all bikers.  Really nice people; a very friendly crowd, but definitely not into it.  I don't blame them; I mean, you're not going to find any Judas Priest, Twisted Sister or Steppenwolf in my setlists.  After several tunes, I said, over the mic, "Uh, folks, I'm getting the impression that I'm in big trouble.  I just played 4 or 5 covers that I figured had the best chance of winning you over, but I can tell that it's not happening.  And it goes downhill from here.  So, whattaya say we just call it a night, and I'll tell the Manager that they can keep their money?"

A cheer erupted and I got a standing ovation.  OK, so they were already standing, but they were obviously grateful to see me go away.  There were offers to help me pack my gear, and a few good-spirited pats on the back for not playing my guitar.

I hadn't seen that many happy bikers since PeeWee Herman did the "Tequila dance" on the bar for the Satan's Helpers motorcycle gang.